Last week I was invited as part of the Mizuno Ambassador Team to a media event for the release of the new Wave Rider 20 at Energia Athletics on Pape Avenue. The idea for the event was to bring together media types in the running world, plus bloggers, plus Ambassadors for fitness and food and information first hand on the new shoe. I don’t think I have ever been more excited to try a new shoe from Mizuno as I was for the Wave Rider 20. Plus, I had never been a part of a test group for a product not yet released to the public, so that alone was exciting and fun! Sort of like a little secret.

When I walked into the store, I was given a bag with my shiny new shoes in them. I promptly changed out of my Mizuno Synchro (best gym shoe ever!!! … review to come) and put on my new Wave Riders. I wear a D width shoe and since the women’s D width (yes this model always comes in D width for women…..read: girl colorus), wasn’t released until January, I got the men’s version. A nice flashy orange with black detailing. 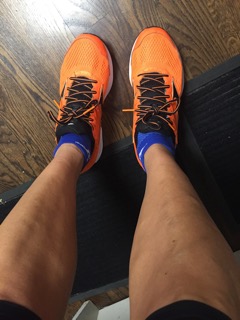 Fresh out of the box !

The first thing I noticed when I put them on was the added cushion in the shoe. Even before I ran. I have been wearing Mizuno exclusively for about 5 years now and even before that I had dabbled here and there with them. I even had the Wave Rider 3, which I had to order online from Vancouver before they were available in Ontario. That’s how much I have loved this shoe over the years!!

Mizuno has always been known for their firm cushioning, sort of an oxymoron, but what that means is it allows for ground feel and a responsiveness that many highly cushioned shoes don’t provide. What it lacked for in cushioning it made up for in the ability to run more efficiently by allowing the foot to not get lost in the shoe. The Mizuno brand definitely had it’s group of followers for these reasons. Now enter Mizuno Wave Rider 20 and soon to be all Mizuno shoes by 2018………I’m sure a whole new bunch of followers to come.

Cloud Wave Technology is new for the Mizuno Wave Rider 20. It has both concave and convex waves in the plate (Mizuno is known for it’s wave plate design which provided that firm responsiveness). The concave waves allow for the foot to be cushioned on impact, the convex waves allow for a springy toe off after foot strike. This is GENIUS!!!  And it’s also one of the reasons  the new Wave Rider 20 my new favourite shoe.

For those with fussy feet, like mine, it’s exactly what I needed. I have been wearing Mizuno for so long since for running, I like that ground feel experience. Wearing a heavily cushioned shoe for me as a runner does not work. My feet get lost, I get friction blisters from all the swishing around, and as I get tired, my feet and lower legs stop working and my form gets very hard to manage. With Mizuno, I avoid all these things and allow my body to still work for my stride which allows it to stay efficient in the face of fatigue. However, my crappy feet ask for cushion. I have always chosen to go responsive over foot wishes because ultimately I still need to feel good when out on a run, so I forgave some of that cushioning for ground feel. Now I don’t have to give up either!!!!!

U4ic is the material Mizuno uses for cushion. As you can see the Wave Rider 20 has increased the amount of U4ic from the past models. 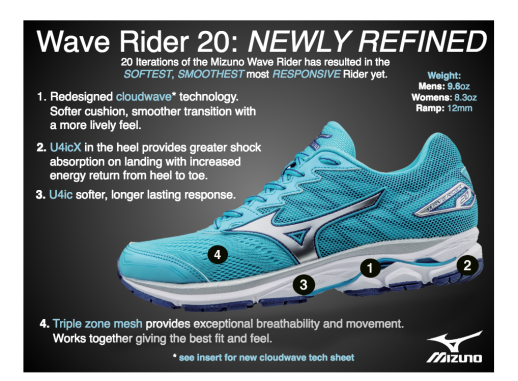 More descriptive specs on the New Rider 20, including the weights for men’s and women’s and the consistent 12 mm ramp .

Finally, the last quality that makes these shoes so great is the new upper. It was introduced with the Mizuno Synchro gym shoe earlier this year and I fell in love with it. Because my right foot is wider than my left for failed post bunion surgery issues, I have often had to cut little “mitral valve”  holes to allow my foot to expand in my running shoes. Mizuno has typically had a plastic strapping across the forefoot and because of my foot issues even in a D width, I had to make little snips. Do you know how traumatizing it is to snip holes in brand new running shoes??! The new upper on both the Synchro and Wave Rider 20 is strapless and a nice soft mesh material, which so far I have not had to take my scissors to! This is so exciting for me:) Maybe future photos will not require me to hide my little artwork.

Take home message: after 4 good runs in these shoes I have declared them my new favourite shoe . This shoe is for you if you like a bit of added softness without feeling like you are landing on pillows and still like an efficient ground feel on foot strike and springy toe off. They feel fast, I run faster, and my feet are happy. What more could anyone want?

A happy me after one of my first runs in the new Wave Rider 20. Matching Breath Thermo accessories too!

These awesome new shoes will be released by end of November 2016. You can find a retailer (such as Energia Athletics) or order online at http://www.mizunocda.com

See you on the roads.

PS…yes I have changed the name of my website from Multisport mom to I’m Fit 4 Life. Since I am no longer doing multisport or racing I’ve changed my tagline. More on this to come!