This past weekend I jumped back into the world of longer course racing. The last time I did a triathlon longer than an Olympic distance was in 2006 when I did Ironman Wisconsin. After that I became turned off of the pain, training, recovery time and nutrition issues that go along with longer course efforts. And I was bored. And slow. With short course, I could be more competitive, work on my speed, be home on Saturdays before 4 pm, and race without worrying about issues related to GI upset and energy failure which regularly plagued me in Ironman racing. With short course I found I was placing in my age category and enjoying getting faster which kept the motivation high to train and race.

So what did I decide to do? After getting back into half marathons last year, and remaining competitive in my category, I thought I would give this half IM thing a go again. Less training, less nutrition issues (hopefully), less boring. This weekend it all came together at the Musselman Half Ironman.

As usual, I was a stressed out mess the days leading up to Sunday. This is usual for me. I turn into a mini bitch (well depends on who you ask!). I stress about what to wear (yes I know this should have been tested out before), what the weather will be like (we triathletes tend to be weather geeks), etc etc. The race was in Geneva , New York, one of the finger lakes and was rated as the 4th best tri in the world by numerous publications and the triathlon world itself. It is a small town race with a big town race feel!

Race morning dawned and as usual I had that feeling of “ugh, do I really want to get out of bed??”….how else does one tend to feel at 4:45 a.m.? Especially after a rather rough nights sleep with noisy adjoining room people and a wedding at the hotel. I for one don’t usually ever wake up excited to race, but I think and have come to accept this is part of my pre race prep!

The forecast was for humidex of close to 40C….and the temps quickly climbed through the day. Setting up in transition was easy. There were spots with your name on it and number and a little personal saying after your name. To be honest I forget what mine said, but something to the effect of being able to achieve a goal. Nice personal touch regardless.

We were corralled into wave starts. I was with all women, so it was good to not get pummelled by any men. Here are a few photos. Note I never smile…..and yes, I was nervous as usual getting into the water. Not my favourite part. I think I secretly fear of drowning or getting beaten up or hyperventilating or something to that effect but invariably once I get going I am totally fine!

Getting ready to get into the water – note the happy face!

I had a great swim. Got into a quick rhythm, was actually able to bilateral breathe, which I can never do in a sprint/Olympic and felt like I was at a good effort and pace. My goal was 40 mins max and I came out in just over 34. Shocked when I looked down at my watch. 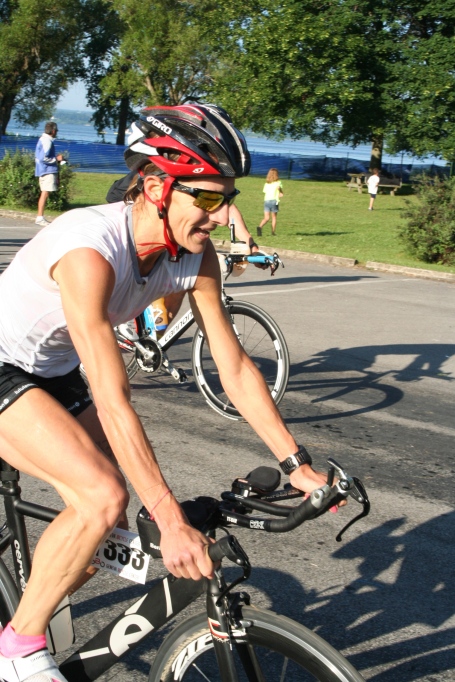 Happy to be on the bike and out of the water!

I had a relatively easy transition, no fighting with the wetsuit and out onto the bike. I had an idea of what intensity level I wanted to ride at to achieve my sub 3:00 goal. I started out a little quick I think but soon settled it down and road very comfortably. The course had very few hills, more like false flats. I only had to change out of big ring about 3 x or so. No need to stand and grind any hills. I like that kind of course in some respects and in others you don’t get as much of a break on the legs. I maintained an even effort through the majority of the ride. I felt the heat but still with a breeze from the biking it was not super hot. I drank and fuelled at regular intervals and felt fine getting off. Goal was sub 3 hours……time 2:52 and change! So far I had bought myself 14 minutes of time to reach my goal race time.

Normally my favorite part of a tri is doing a sub 1 minute T2. But I decided to take the extra 30 seconds and throw some moleskin on my area of my toe that always rubs in my shoes. So unfortunately I did not get that sub 1 minuter but it did save THAT area of my foot. Not so much any others though! I

I felt strong leaving transition. Thankful that I did not take out too much energy on the bike. I ran by Michael in the first km and he said, “save some energy for the hills!”. I said no problem. As I ticked off km 1 and 2 at 4:30 ish pace/km. Hmmm, I thought, better slow down a bit.

Ohhh, it is hot out here! And this visor is driving me nuts.

I quickly threw the visor to Michael as it was making me too hot. I hate running in hats! I was noticing how hot it was but at each aid station I made sure to use water on me, sponges, and drink 1-2 big sips from 2 cups. it got to the point where as much as it was hot, I think was not focusing on that but rather getting the km’s to click by and keep my form efficient. The course had 3 big hills. And I mean BIG……I ended up walking portions of 2 of them as soon as I started to feel my hamstring tendon tighten up. I am glad I did that. I felt pretty good for the first 15 km, took a gel again, not bad through 17, then ……. legs said, yah you think you are holding sub 5:00km’s you have another thing coming! By the time I got to the 18km mark I was focusing more on not walking, but keeping feet going and not tripping! My run goal was sub 1:45. I finished the run in 1:47. I was pretty darn happy with that given the conditions.

Here is a photo right before the finish line:

So happy to be done…can’t you tell ??? Oh right no smiling!

My husband always tells me to smile when I am running or racing. Well by the time I saw him with 2 miles to go, the last thing I wanted to do was smile. I was HOT , tired, sore and wanted to be done! I doubt he would have smiled either…well maybe he would have!

And then the awards. We got a local wine bottle and some natural peanut butter.  I was so happy when they did the women first as we had a 5 hour trip home. And I was soooo hot and tired.

Chatting with the age group champion. Who beat me by 8 mins! We ran the same time, within 10 sec of each other, but she smoked me on the swim!

Overall a great venue, a well put on race. It’s no wonder it is rated so high. The post race party is great. The amount of food flowing, and all really good and healthy too for the most part. They had a local fruit orchard with vats of cherries and apricots and watermelon! Wegmans was the main sponsor and so the selection was like no other and you could have more than one of each item. What a novelty!

And then to help recover…. 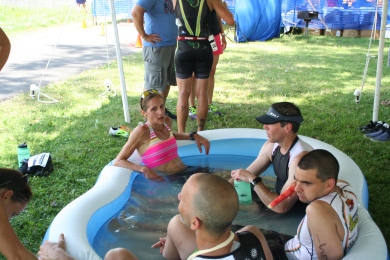 Just me and the boys in the ice bath. 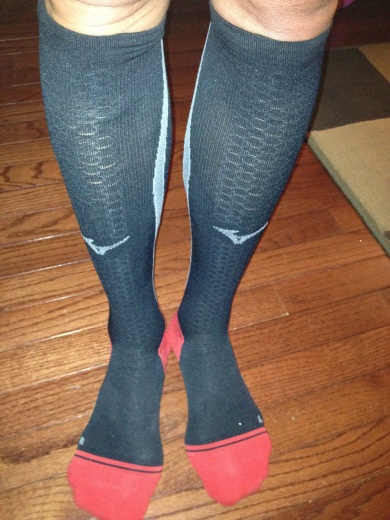 So as much as I said I would NEVER do this distance again right after the race and in the last 4 km or so, the feeling of accomplishment and satisfaction I got from it, may make me decide to give it another go next summer. Maybe a different location this time as it is a great way to see an area.

Next up: Irongirl tri ….500m swim/20km bike/5 km run……Looking forward to the all women event and the less amount of training required. Oh and it will be over in a flash. Back to speed now!